As the topic of sexual and reproductive health re-enters the public consciousness in America through the overturning of Roe v. Wade, it becomes increasingly important to access American Sex Education, or rather, the failures of it, and how we teach these topics to our most impressionable population, children. The state of sex-education in this country is in shambles. Though the majority of Americans support sex-education in middle school and in high school, what exactly does that education look like?

In addition to many schools simply not providing sex-education, oftentimes the education that is provided is subpar. The CDC recommends that schools cover 20 essential topics in their sex-education, in a 2018 study, they found that less than half of American high schools, and fewer than one fifth of American middle schools touched on the topics outlined by the CDC [4]. Some states even prohibit sex education to touch on topics such as sexual orientation and contraception. There are only nine states where it is mandated that sex-education must be inclusive of the LGBTQ+ community. Additionally, there are five states where sex-education relating to sexual orientation must be negative, for example in Oklahoma it is taught that “homosexual activity” is one cause of contracting HIV/AIDS [1].

Taking all of this background into account, it is time to address the elephant in the room, abstinence-only sex-education. In a study by the Guttmacher Institute, it was found that from the years of 2015-2019, more American teens had received the advice to abstain or wait till marriage than had been told how to obtain birth control or condoms [6]. This method of sex-education, to put it simply, does not work. In 2008, a study by the Journal of Adolescent Health found that there was a higher likelihood of pregnancy among teens that received abstinence-only sex-education in comparison to those who were taught about proper contraceptive methods [2]. Despite the fact that abstinence-only education does not work, twelve states mandate that abstinence must be covered in their sex-ed courses and twenty five states must stress the importance of abstinence in their sex-ed courses [1].

Despite how important preventing teen pregnancy as well as STDs and STIs is, comprehensive sex-education is much more than just a preventative measure. It teaches teens and children about important topics such as consent from a young age. It allows young people to feel comfortable and empowered in their own bodies. Abstinence-only sex-education breeds shame and discomfort among young people. This shame and fear can have long-lasting negative effects on the mental health of teens as they continue on into adulthood. It is important to start teaching kids how to be respectful of their bodies and other bodies from a young age. Comprehensive sex-education creates a space where young people do not need to feel afraid of themselves and their bodies, thus allowing them to feeling comfortable and safe. 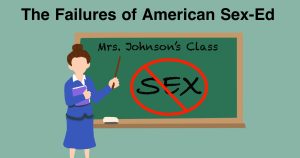