The Helper and the Witness

In 2018 the Nobel Peace Prize was shared by two very different individuals: Denis Mukwege, a 63-year-old Congolese doctor who founded the Panzi Hospital, and Nadia Murad, a 24-year-old Iraqi Yazidi human rights activist, who at age 19 was kidnapped by ISIS. What cause united these unique individuals from disparate parts of the globe? The Nobel committee recognized their advocacy for victims of wartime sexual violence, defined by scholars as “rape; sexual slavery and forced marriage; forced prostitution, pregnancy, and sterilization; sexual mutilation; and sexual torture” (Elizabeth Jean Wood, 2018). Dr. Mukwege has dedicated his career as a gynecologist to physically healing victims of conflict-related sexual violence in Africa and Ms. Murad, a survivor of such violence has founded an organization to raise funds and awareness to support other women brutalized by this increasingly common war crime/crime against humanity. The Nobel committee’s recognition reflects what scholars and international organizations have long realized: conflict affects women in unique ways. 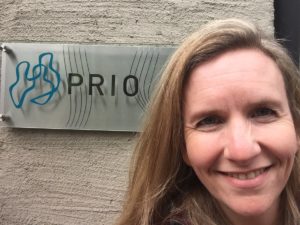 In May 2019 I traveled to Oslo, Norway to participate in a PhD course on Gender, Peace and Conflict held at the Research School on Peace and Conflict, sponsored by the Peace Research Institute Oslo (PRIO). For three days, I met with about 20 other graduate students from around the world to learn from top scholars researching gender dynamics in all stages of the conflict process, including conflict risk, conflict dynamics, and conflict resolution. This course at PRIO was helpful in preparing me for the work I will be doing with the Center. In particular, there were a few sessions that were especially relevant to issues of sexual and reproductive health in conflict, such as multiple sessions on conflict related sexual violence and a session on maternal health outcomes in conflict settings.

Current research (both qualitative studies and quantitative studies) on conflict related sexual violence demonstrates that it is not an inevitable part of war, but rather a tactic used by some armed groups to assert power. Since the 1990s, when the war in Bosnia and the genocide in Rwanda produced hundreds of thousands of victims of conflict related sexual violence, there has been new and increased attention, documentation, and conceptualization of this topic as well as new developments in international law allowing for criminal prosecution for violators. For example, after WWII, neither the Nuremburg or Tokyo trials addressed sexual violence; despite widespread violations, it was seen as a private matter. Today, through the International Criminal Court, military leaders responsible for troops violating international law have been prosecuted and sentenced for their role in perpetrating conflict related sexual violence. Although there has been improvement on this front, there is still more work to be done to raise awareness, care for survivors, combat this practice, and execute justice in conflict and post-conflict settings.