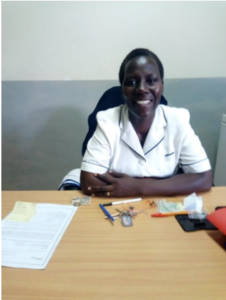 Everline was first employed by the Ministry of Health at Ahero Health Facility after she graduated in 1993 with a Diploma in Nursing. She further enrolled for certificate courses in Counseling and HIV Testing Services (HTS) because she felt these would make her service delivery better. Everline then became sponsored for a course in counseling supervision because of her commitment at work. Upon completion of the sponsored course, Everline started the track for a Higher Diploma in Epidemiology and her quest for education then led her to get a promotion as Nursing Officer in Charge at Muhoroni Health Facility.

In the year 2007, there was post-election violence in Kenya which prolonged Everline’s graduation from Jomo Kenyatta University of Agriculture and Technology (JKUAT) with her BSc Degree in Nursing; however, Everline graduated the following year and was deployed at her previous work station Muhoroni Health Facility in the same capacity.

In 2014, she was transferred to Migosi Sub-County Hospital where she is currently serving as the Nursing Officer in Charge. Over the course of her education and experience, Everline has developed a strong interest in oncology and hopes to one day pursue this field. She was chosen, along with 2 other staff from Migosi Hospital, by the Cure Cervical Cancer (CCC) team to attend training at Jaramogi Oginga Odinga Teaching and Referral Hospital (JOOTRH). This 3-day program incorporated both intensive theory and practice on real clients who were mobilized and Everline and her colleagues then were ready to implement these skills at their various work stations.

A month after the training, Everline felt there was great monitoring, supervision, and support at the hospital from the those who participated in the program, but this was not long lived. She began to face challenges as she found really only herself interested in providing cervical cancer screening and treatment services. This was because during that time, cervical cancer screening was not emphasized because it incorporated family planning (FP) services.

Everline had to be both a leader and a part of the team and it was not easy for her because she did not receive any support, had a lot of competing tasks as the facility, had to continuously multitask, and she had nobody to consult with. She was however encouraged by the consistent outcomes of her clients as they were grateful because she not only offered treatment, but counseled the clients as well which made them feel more at ease.

Monetary gain was not a priority for Everline; it was truly her clients who greatly influenced and motivated her knowing she had helped them for the better.

In 2017, the Tumaini La Maisha Organization found its way to Everline and she has since worked closely with them as they have supported the facility and her in terms of opportunity to attend trainings in fields such as Optical Device Technology (ODT) which helps to detect breast cancer. Additionally, in 2018, she received refresher training from the CCC Team that paid a visit through the county government.

Everline notes that through perseverance, she has gained pertinent skills, had privileges interacting with organizations and teams that have given her cervical cancer screening/treatment skills, and grown as a person through her work. She is also glad that as a leader at the facility, she has helped develop growth in terms of cervical cancer screening and treatment uptake. She believes her colleagues have grown too and despite challenges with supplies- various organizations have supported in providing consumable tools for the said services they teach in trainings.