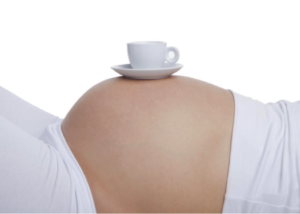 Experts are beginning to warn pregnant mothers who drink coffee on the daily in heavy loads about potential impacts on their pregnancy. Researchers at the University College Dublin have found results that have correlated increased consumption in caffeine during pregnancy to premature births. The National Health Service (NHS) of the UK suggests to that the safe caffeine intake for pregnant women should be kept at around 200 mg, or about 2 regular cups of coffee. Their data suggests that even drinking the below what is considered the “safe” cutoff for caffeine during pregnancy, it may still lead to giving birth to a small baby.

The study consisted of 941 mother-baby pairs born in Ireland. Tea was the source of caffeine to 48% of mothers, and coffee was the source of caffeine for 38% of mothers. Results at the end of the study indicated that for the first trimester for every additional 100 mg of caffeine consumed daily, there is a risk in reduction of weight in birth weight by 0.5 lbs. There were additional side effects to the increasing consumption of caffeine, including a decrease in head circumference and pregnancy-term length.  The researchers have found that data that leads them to believe that caffeine may restrict blood flow to the placenta, which can hinder a baby’s growth. In whole, pregnant women who drink high amounts of coffee or tea during pregnancy are more likely to have small babies than the average, the research suggests.