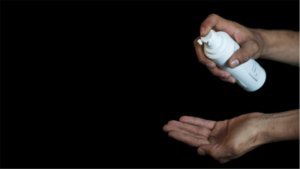 A new form of contraceptive for men might be out on the market soon, in the form of a birth control gel. This gel is called NES/T and is rubbed on the back and shoulders on a daily basis to be absorbed by the skin. This gel is supposed to reversibly lower sperm count to a very they cannot get a woman pregnant. It contains segesterone acetate — which contains progestin — and a dose of testosterone and is made under the brand name Nestorone. Testosterone production in the testes is hindered by progestin, which results in very low sperm production. This gel is very similar to a vaginal ring used as a female contraceptive, which contains Nestorone combined with a hormone called estradiol.

The hormone mimics pregnancy in women, which causes women to stop releasing eggs. If there aren’t any eggs released, she can’t get pregnant. In men, the hormone makes the body think it has made enough sperm and it can stop producing it.  The contraceptive was made as a gel because hormones last longer and work better when absorbed by the skin compared to testosterone taken in an oral pill. The National Institutes of Health (NIH) is still looking to finish enrolling about 400 couples to test the gel’s effectiveness and if men will adhere to the instructions of daily application. One of the biggest concerns lies in whether men will like the contraceptive gel and if they will use it. If men report high effectiveness and like the contraceptive gel, it will be the first commercial male hormonal contraceptive on the U.S. market and men won’t be restricted to choosing between condoms and vasectomies.