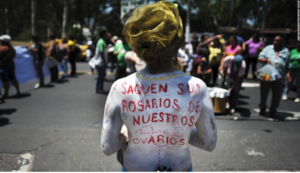 With the reality overturning Roe vs Wade becoming increasingly likely, El Salvador can teach us what some of the consequences might be to that. El Salvador is one of six countries in Latin America that has an absolute ban on abortion. They imposed a total ban on abortion since 1998 and are very strict about the enforcement. There isn’t an exception, whether rape or incest was involved, or even if the pregnancy is life-threatening to the mother, an abortion remains completely legal. One of the biggest problems with this law, is that many times when a woman has a miscarriage, doctors can falsely assume that the woman had an aborted pregnancy, when in fact it was a miscarriage. Others can also report someone suspected of having an abortion, even if it was a miscarriage, and the woman can be prosecuted for an abortion. Many women have been incarcerated for supposed abortions. Many women’s rights groups are working hard to lift the ban on abortion. Two bills have been proposed in the legislature this year, opening up the debate since the ban was passed. Placing an absolute ban on abortion doesn’t just incarcerate people unjustly for miscarriages viewed as voluntary abortions, but it also does not mean that people stop seeking abortion.