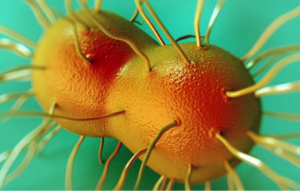 About 78 million people around the world are infected with gonorrhea according to the World Health Organization (WHO). In 2017, the Center for Disease Control and Prevention (CDC) reported gonorrhea as the most common sexually transmitted disease in the United States. According to WHO, two-thirds of the world’s countries have reported antibiotic-resistant gonorrhea to all antibiotics. This may result in not being able to treat gonorrhea at all. Although a gonorrhea infection is not life-threatening, it can lead to many health problems such as pelvic inflammatory disease which can lead to ectopic pregnancy and infertility in women. In men, untreated gonorrhea can lead to epididymitis which can also lead to infertility. The problem with the bacteria is that rather than losing resistance after not being exposed to an antibiotic, they instead retain their resistance genes. This allows for gonorrhea strains to become more resistant and transfer their genes to other strains, thus, allowing for gonorrhea to evolve quicker.

Fortunately, researchers are developing a new drug for antibiotic-resistant gonorrhea and have demonstrated a 96% effectiveness rate. This new drug is very important as there is no vaccine for gonorrhea. Without the new drug, gonorrhea will contribute to the line of “Superbugs” becoming resistant to all antibiotics. Researchers hope that the drug will be available to the public by 2023. Until then, people in the U.S. will have to follow the recommendation by the CDC, which is to enter a combination drug therapy of two different antibiotics.