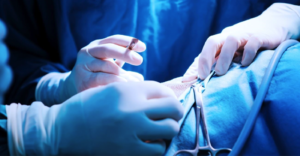 Cervical cancer screening has greatly reduced its incidence in the United States, resulting in about 13,000 cases a year and 4,000 deaths. It remains the fourth most common cause of cancer death in women worldwide, however, causing over 300,000 deaths per year. Cervical cancer develops after persistent infection by the human papillomavirus (HPV), an extremely common STD.  While later stages are treated with radiation, early stage cervical cancer is commonly treated through surgery.  An increasingly popular method is a minimally invasive surgery performed through small cuts in the abdomen, using either laparoscopy or a robot. This surgery technique is regarded as a medical advancement that lets patients recover faster. Unlike drugs, which are heavily regulated by the Food and Drug Administration, surgery is more adaptive. As long as the hospital allows it, surgeons are able to try new approaches with unconventional tools.  Two recent studies published in the New England Journal of Medicine found that in comparison to an open abdominal operation, minimally invasive surgery is more likely to result in cancer recurrence or death. Some hospitals such as John Hopkins have stopped performing minimally invasive cervical cancer surgery and resorted back to open abdominal surgery. While there was some initial resistance from surgeons who went through extensive training to prepare for minimally invasive procedures, many patients are now encouraged to opt for open surgery unless they are at high risk for complications. Researchers have hypothesized a connection between the increasing popularity of minimally invasive surgery and decreases in cervical cancer survival, which have been seen since 2006.