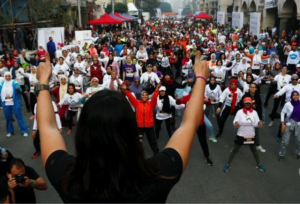 In late November 2018, hundreds of women participated in a race in Cairo, Egypt in support of a campaign to end sexual violence. The race was planned after Cairo was ranked as the most dangerous megacity in the world for women. This was determined from a variety of factors, including sexual violence, cultural practices, healthcare, and financial abilities. Women in Egypt often do not engage in athletic activities in public spaces, as they are oftentimes subjected to harassment or assault. The goal of this race was to encourage women and girls to feel safe running and exercising in public spaces in the country.  The third-place winner of the race, Amany Khalil, said “I came to this race today so that all women can run in the street without any fears or worries.” The Egyptian Center for Women’s Rights has classified violence against women committed by state institutions, domestic violence, female genital mutilation, and structural violence as the four components of gender-based violence in Egypt.