Each year, when December comes around, people tend to reflect on the past year, sometimes through thoughtful reflections on progress, challenges or accomplishments, at times through lists of the best or worst and often culminating in resolutions for next year. Sometimes it takes the form of satire, such as the Center’s entry in the DGHI door decorating contest, which asks for some good news for reproductive health for Christmas, providing some tongue-in-cheek examples of what that would be. Indeed, 2018 was a roller coaster for global reproductive health news—key achievements, such as the repeal of the anti-abortion amendment in Ireland, often seemed to be immediately overshadowed by setbacks, such as the failure of a similar bill to pass in Argentina. Konyin Adewumi, DGHI MSc ’17, has reflected on the ups and downs of reproductive health this past year. While acknowledging that this year was difficult for many women, she concluded with overall optimism about the progress on women’s health and hopefulness about the future of reproductive justice.

I agree with Konyin’s assessment: there is real evidence that the future of global reproductive health is bright. In May, the WHO announced that they will target cervical cancer elimination. By October, Australia reported that at current rates of screening and vaccination, cervical cancer would be eliminated in the next ten years across the continent. A landmark report by the National Academy of Science, Engineering and Medicine reinforced the safety of abortion in the United States, refuting the political attempts to regulate providers and sites with scientific evidence. Meanwhile, abortion rates continue to decrease in the United States, mainly due to better coverage of effective contraception among high-risk populations. Despite increasing threats to Planned Parenthood and abortion access in the United States, the Supreme Court recently declined to hear a case to limit Medicaid coverage at PP, essentially upholding a lower court ruling in Planned Parenthood’s favor. Reproductive and women’s health legislation may be more progressive in the upcoming years, as a record-breaking number of women were elected to the US House.

On a more local level, Duke continues to show their leadership in global reproductive health. The Global Reproductive Health Leadership Symposium and the launch of the Center in March are just a few examples of the interest in growing Duke’s capacity and providing opportunities for students and faculty. Duke students continue to show their passion and talent in this area, with potential to make real change in Durham and around the world. A Data+/Bass Connections team (BD4RH) working on data visualization methods for contraceptive calendar data presented the apps they developed and won an award at the ICFP meeting in Kigali, Rwanda. A group of Duke seniors developed a mobile app to facilitate community-based cervical cancer screening in Kenya—and will be testing it in the field next spring and summer. Duke students were ready to show their voices in this year’s election—over 90% of my Global SRH class voted, and had the selfies (see below) to prove it!  Four students visited the Kisumu site this summer, and Duke leadership showed commitment to the mission, with a visit from the Chancellor and DGHI Leadership. 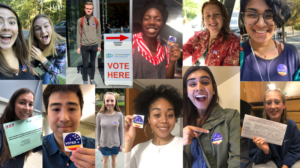 As we wind down this year, I hope everyone finds some time to relax with family and friends, and engage in whatever traditions and celebrations bring you joy. 2019 will be full of challenges and opportunities, and I look forward to continuing this work with a renewed sense of energy, purpose and possibility.