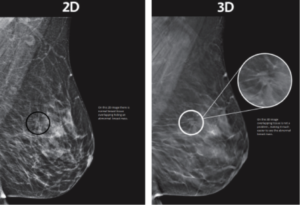 A large clinical study in Sweden found that 3D mammography is able to detect at least 30% more cancers than traditional mammography, most of which are invasive cancers. 3D mammography, otherwise known as breast tomosynthesis, also reduces the compression on the breast during examination, which may encourage more women to reach out for screening. Traditional mammographies capture all breast tissue in one image. With breast tomosynthesis, the final result is 3D, with several low-dose x-ray images at different angles constructed on the computer to show a model of the breast. This allows for a more precise ability in detecting tumors. On the other hand, 3D mammography also captures more structures in the breast in general, so some women need to be re-examined to ensure there are no tumors. Misdiagnosis remains a risk with traditional mammographies as well. An additional challenge in using 3D mammographies is the lack of radiologists who are able to read the greater image material. It’s possible that computers may be able to help with image review in the future, but it will take time for a software to be created and tested.