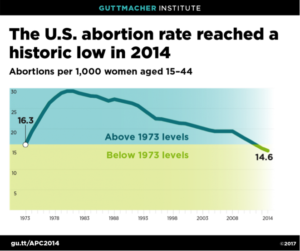 Data that were recently released from the Center for Disease Control (CDC) indicate that the number of abortions in the United States has decreased by 24% over the last decade. In reporting the data through 2015, the CDC noted that this drop was almost certainly related to a lower number of unintended pregnancies, the largest contributor to induced abortion, as well as increased use of effective contraception methods.

The overall trend is not consistent for women of different demographic groups, such as race, class, and marital and motherhood status. While white and black women together make up the vast majority of abortions, black women account for nearly 20 more abortions per 1000 women than their white counterparts. Women who were not married accounted for the majority of those seeking an abortion, as do women who already have children. Over 90% of abortion occur before the 13-week mark and abortions that do not occur during the first trimester are largely delayed due to financial, travel, or legal barriers. Additionally, abortions which occur after the first trimester may be the result of new information about fetal health. Those responsible for the data concluded the report by citing the importance of having data about reproductive health, in order to meet the greatest needs of those seeking services.