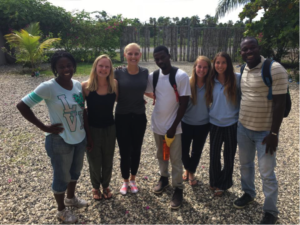 During the summer of 2017 I traveled to Léogane, Haiti where I, and a team of student researchers, spent two months collecting data on women’s stressors in the community through a Duke SRT program. As a team, we had very little global health research experience, but after one week of orientation we were left on our own to recruit community leaders for interviews and organize focus groups for a project entitled “Mental and Reproductive Health Interventions for Haitian Women: Adapting strategies from community input on coping with stress.” At first we were extremely lost, but with the help of our translator team and a lot of perseverance, we managed to reach our data collection goal. We were also fortunate because the women and men we worked with in the community were incredibly welcoming and open to sharing their life experiences regarding reproductive health. Overall, we asked women and men in the community about women’s stressors and coping strategies.  Based off this initial qualitative data, a fellow team member and I designed a mental health intervention and a reproductive health intervention. We presented these interventions to focus groups to gain feedback on their acceptability and feasibility before adjusting them and eventually reaching a finished product.The mental health intervention involved 3 components: the “Friendship Bench” (adapted from a study done in Zimbabwe) where women could come to talk to a health promoter about their stress, a skills training workshop, and a women’s support group. The reproductive health intervention involved 2 components: family planning education and couple’s training. We developed these two interventions because we found that women’s stress mainly came from relationship difficulties, lack of autonomy, and having too many children.The path to get there was arduous and along the way the team argued almost continuously. It was difficult enough trying to navigate a completely new place and gain partnerships with people in the community, but as team members we could not seem to form partnerships with each other. For the most part, the only thing we had in common was an interest in global reproductive health and a dedication to the research project. Other than that, we disagreed on how to conduct the research and on other personal issues almost every step of the way. It did not help that there were eight of us packed into a room with limited air conditioning in two of the hottest months of the year. However, reflecting back on this experience, I recognize that despite these challenges, or perhaps as a result of them, I still learned a great deal and grew as a human being. We managed to overcome our differences in order to gather data that could be used to help women in the community and we did our best to respect the community members in the process.