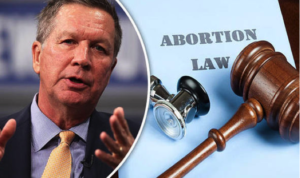 State legislators in Ohio are currently debating House Bill 565, a piece of proposed legislation that imposes strict limitations on access to abortion. The law changes the definition of person to include “any unborn human,” which results in the criminalization of abortion. If the law is signed into law, it would effectively criminalize abortion. Any woman who undergoes the procedure, as well as any doctor who performs it, would face charges for murder. Because the death penalty is permitted in the state of Ohio, women and doctors could also be sentenced to death because of their role in the procedure. Despite the fact that many modern abortion regulations include exemptions of pregnancies resulting from rape or incest, as well as those that pose a threat to the pregnant woman’s life, House Bill 565 includes no such provisions.

Notably, the group of legislators sponsoring and co-sponsoring the bill is overwhelmingly male, with only two out of sixteen of those lawmakers identifying as women. It is unclear whether Ohio Governor John Kasich, one of over a dozen 2016 Republican presidential contenders, will sign the bill into law should it pass in both legislative chambers. However, he has said he would veto a similar “heartbeat bill” passed by the Ohio House, insinuating that he might have a similar response to House Bill 565.