Ovarian cancer is the 7th most common cancer in the world. Nearly 300,000 women are predicted to develop ovarian cancer this year and less than half of these women diagnosed are expected to survive after 5 years. However, there is very little awareness of ovarian cancer and its effects. A survey conducted by the World Ovarian Cancer Coalition gathered information from 1,531 women across 44 countries. The women who participated were from high, middle, and low income countries and were asked to answer online questions about their experiences with ovarian cancer. The study points to the fact that over two thirds of women who participated had never even heard of ovarian cancer or knew nothing about it before they were diagnosed. Additionally, less than half of these women attempted to find care or answers for their symptoms within the first month they appeared, and one in every ten women did not seek medical help for 6 months. This data is important because ovarian cancer is actually more treatable and can be curable within the earliest stages of diagnosis. Yet, according to the American Cancer society, “4 out of 5 ovarian cancer patients are diagnosed with advanced disease that has spread throughout the abdominal cavity” therefore making treatment more difficult. Physicians and researchers alike feel as though the lack of awareness of ovarian cancer and symptoms that could point to it largely contribute to delays in diagnosis and fatalities. 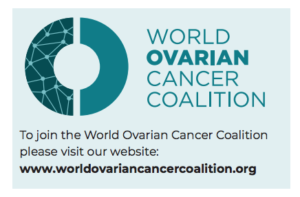 This is why the World Ovarian Cancer Coalition is working to develop the first Global Ovarian Cancer Charter in 2019 in order to help “drive the changes we need to fulfill our collective mission of ensuring the best possible chance of survival, and the best quality of life for every woman with ovarian cancer – wherever she lives.”