A study recently published in The Lancet journal reveals that from 2000 to 2015 there has been approximately a double in the number of cesarean section (C-section) births in the world. C-section births occur when a surgery is performed to open a woman’s lower abdomen and remove the baby. These procedures can either be planned in advance or they can happen suddenly if problems occur during birthing. There are risks to C-section births for the woman, such as infection and postpartum heavy bleeding, and the baby, such as trouble breathing and injury. Additionally, C-sections create a more complicated labor recovery for the mother and pose a threat to future labor complications. The figures from the study state that in 2000 C-sections accounted for 12.1% of all births and in 2015 they accounted for 21.1% of all births. There is evidence published by the World Health Organization stating that there is “no justification for any region to have a caesarean section rate higher than 10-15%.” On average, the study found that 60% of countries overuse C-sections while 25% of countries under-use them; countries in Latin America and the Caribbean as well as the US and UK have sharp increases while in West and Central Africa, C-sections are very rare. This is due to the fact that lower-income women are often found delivering at home and not in a health facility where C-sections would occur. The WHO concluded that, “many women in need of caesarean sections still do not have access to caesarean section particularly in low resource settings, many others undergo the procedure unnecessarily, for reasons which cannot be medically justified.” Women have been more commonly asking for C-sections due to fear of labor pain, 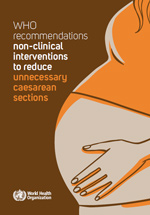 reduced sexual function, effects of pelvic damage, and previous bad experience with vaginal birth. In order to combat the sharp rise in C-sections, the WHO released key recommendations which include education interventions, clinical guidelines and a requirement for a second opinion for C-sections.