Passersby could hardly miss the bright pink stucco building near downtown Jackson, Mississippi in the southern United States. But the unusual color is not all that makes the building unique. The Pink House, as it’s called, is home to the Jackson Women’s Health Organization, the only remaining abortion clinic in the state of Mississippi. 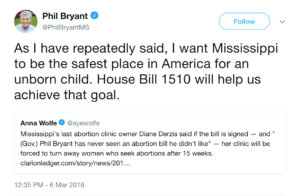 With some of the toughest abortion restrictions in the nation, Mississippi is one of 29 states classified as “extremely hostile” to abortion by leading SRHR research organization the Guttmacher Institute. Women currently cannot obtain an abortion after 15 weeks of gestation, the most restrictive ban in the nation. State governor Phil Bryant has repeatedly pledged to make Mississippi “the safest place in American for the unborn child,” joining other lawmakers in a crusade against reproductive freedom.

Yet this ostensible commitment to safety is less a compassion toward Mississippi’s children than a powerful political tool. Despite their professed desire to protect women and children, Governor Bryant and Mississippi state legislators continue to disregard the poor health outcomes for women and children across the state. The pregnancy-related maternal mortality rate has nearly tripled since 2015, and Mississippi has the second highest rate of fetal death among all 50 states. This crisis particularly impacts black women and children. The pregnancy-related maternal mortality rate of black mothers was nearly double that of white mothers in 2012. State lawmakers seem far less invested in improving the lives of Mississippi women and children than they are in oppressively regulating women’s reproductive decisions.

A woman seeking an abortion in Mississippi must receive state-directed, in-person counseling designed to discourage her from the procedure, and a mandated ultrasound with the option to view the image. She then must undergo a 24-hour waiting period, thus requiring her to make two separate trips to the clinic. Measuring nearly 50,000 square miles and containing close to three million residents, Mississippi is hardly a small state. Getting to Jackson from the corners of the state could take several hours of travel, meaning that the state-mandated waiting period forces women to cover transportation costs for multiple trips to the clinic or purchase a hotel room overnight. The use of telemedicine to administer medication abortion is prohibited, further disadvantaging low-income women and those living far from the state capital.

On top of transportation and other travel costs, women must find a way to pay for the abortion procedure itself. Public funding is available for abortion only in cases of life endangerment, rape, incest, or fetal impairment, effectively barring low-income women from exercising reproductive choice. Those who receive their health insurance through the state exchange under the Affordable Care Act, or through their jobs as public employees, are denied abortion coverage except in cases of life endangerment, rape, or incest.

Any one of these restrictions present a significant barrier to women seeking to exercise their reproductive freedom. In combination, Mississippi’s restrictive abortion laws have created a crisis. Denied access to legal avenues for terminating a pregnancy, some Mississippi women are looking to self-induce abortion outside of a formal clinic setting. The state has the highest rate of Google searches for self-induced abortion. And while the existing research on how often women follow through with self-inducing an abortion is limited, a comparison of legal abortion and birth data in Mississippi and other states hostile to abortion suggests that significant numbers of women are quietly terminating their own pregnancies. Women on Web, a Dutch non-profit  that mails abortion medication to women around the world, received more than 600 requests from women in the United States in 2015. Data suggests that self-abortion is on the rise in the United States, and most concentrated in states that, like Mississippi, have dramatically restricted reproductive rights.

If Roe v. Wade were to be overturned–a reality that seems increasingly likely with Justice Anthony Kennedy’s retirement from the U.S. Supreme Court and President Trump’s nomination of conservative judge Brett Kavanaugh–abortion would instantly be banned across Mississippi. And both research and history tell us that self-induced abortion would increase. Laws that seek to limit abortions do not stop abortions from happening, but often make them less safe. We will likely see a rise in the number of women researching self-induced abortion and attempting to perform the procedure on their own. And because desperate women in crisis may turn to extreme measures to terminate an unwanted pregnancy, we will almost certainly see a rise in hospitalizations and deaths.

Amidst the bleak reality that is abortion rights in Mississippi, and indeed across the United States, abortion funds offer a glimmer of hope. These grassroots organizations help remove the financial and logistical barriers to abortion access. If Roe v. Wade is overturned, they will continue to work to connect vulnerable women with this essential medical care. Consider supporting their work to preserve some semblance of reproductive choice in the United States.